This week a WIP came back to me.  Earlier this year my friend, Kerrie Hollihan, asked if I would stitch some blackwork (i.e., reversible double running work) to possibly be used as an illustration in her forthcoming book on Queen Elizabeth I.  (Kerrie writes delightful and intelligent books on historical figures -- including Sir Isaac Newton and Teddy Roosevelt -- for middle-school aged children.  You can find more info at her website here.)

We thought that a band from a sampler wouldn't mean much to most children today, so decided on a stitched handkerchief.  So with help from stitching friends who lent books of historical patterns and dipped into their stashes for soft and fine ecclesiastical linen and tightly wound silk sewing thread, I was set.  And stitching away I went.  Seeing the piece in progress, Kerrie thought the in-progress piece might make the best illustration, so she has had it for the summer.  Now it's back, and I hope to finish the stitching this fall.

Here's a photo of the front of the piece thus far: 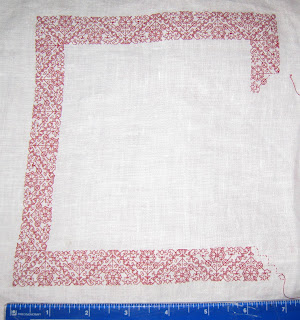 And, because I have to show off just a little, here's a picture of the back.  All in all it looks pretty good, and it shows how stitching like this would have worked in functional items.  The problem really isn't doing reversible paths in the stitching or even ending an occasional thread.  The problem is that in repeating the pattern again and again, I tend to make little errors in the pattern, which then have to be filled in later. . . which create more starts and stops.   (If you look carefully you CAN tell which is the wrong side. . .but I'm not going to give you that good a picture!) 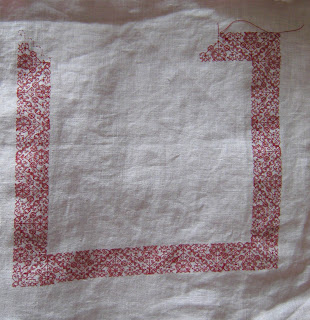 Here's a close-up of the pattern.  It's so charming and feminine, and I've been enjoying stitching it. 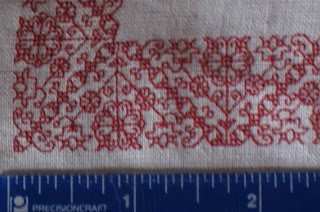 It has also been an interesting experience working on a fabric that one can easily imagine wearing.  I haven't counted carefully, but the thread count here is around 50-55 threads per inch, and you'll note from the photo that thread count is slightly different horizontally from vertically.  Interestingly, working on that small a count isn't as difficult as one would think.  The trickiest part is that I'm using a small sharp needle because of the small thread count, and from time to time it's easy to pierce a thread.  It's also really easy to create little white gaps on the reverse side if the needle isn't angled STRAIGHT through the fabric.  I find I get the best results when I am able to actually pierce the thread from the first journey as I do the second journey, although this isn't always possible.

It's also interesting working with the very tightly wound sewing-type silk thread.  I'm using beeswax to prevent totally impossible knotting.  But beyond that, there are definitely some advantages to this thread.  In particular, the thread is REALLY tough.  Even very very tight knots can be pulled apart, and the thread does not fray.  That's quite a difference from DMC floss or many other silks I've used.

I will be traveling over the next few weeks, and this will be a take-along project -- perfect for traveling because it's very small, has only a 1-page chart, and a small spool of thread.  It all fits in a sandwich size zip lock bag.
Posted by Stitching With Kittens at 5:30 PM