Yes. . . a terrible pun.  But a noteworthy event nonetheless.  After sitting and staring at my stumpwork lion and a file of photos of historical lions, I finally jumped in and have completed my little lion's face and mane.  Here's the entire piece as of this afternoon: 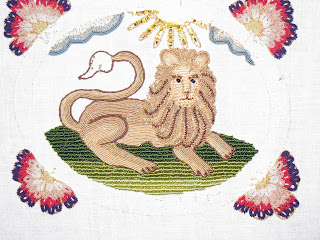 And here's the newly stitched face and mane close up: 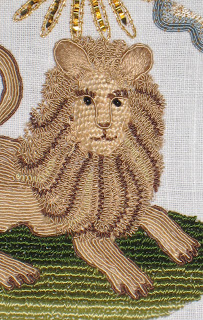 For the face, I was trying to get some of the whimsy of some of the historical pieces without the incredible oddness some of them display.   I think a lot of them look a lot like King Charles II. . . although I'm not sure whether that was the conscious intent.  And I was trying for some of that elegant but just a touch debauched -- but not malicious or really dangerous -- look.

I'm not sure I really succeeded in that, but I do think he has a pleasant face. . . which was part of my goal.  As far as more closely matching the historical examples, the following pictures show some of the issues.  The first of these is from the Maidstone Museum and the other two are from online photos of pieces of the Richmond collection, which were auctioned earlier this year. 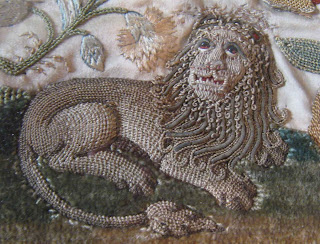 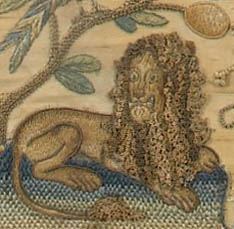 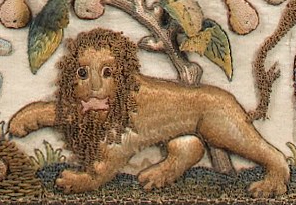 So I was aiming at some of the feeling of these guys, but had definite problems.  Most of the historical lions' faces weren't really round (and I already had a round face background stitched).   And I am really curious as to how exactly a lot of the dimensionality was created. . . as in the first historical lion picture.  My lion has a piece of nose-shaped felt plus about 6 stitches of #5 perle cotton padding, but the finished face really doesn't reflect any of it.  So clearly more dramatic techniques were needed for the more dramatic results -- not an easy thing in a truly tiny area.  I'm also stumped as to how the open mouths were managed.  I tried to use a tiny piece of the silk covered perle purl (that's what the mouth of the first guy was made of) to create an open-mouthed look. . . but it didn't work for me.


For the mane, my very very favorite looks either wouldn't work on the body of my lion (i.e., the Maidstone lion), and/or used an EXCEPTIONAL amount of materials. . . which would have meant ordering a lot of stuff. . .with no guarantee that everything would fit together well.  It looks like the historical stitchers had more choices of materials.  The silk perle purls we had are very recently created threads (how exciting is that!!). . .and naturally enough come in a limited number of colors.  If you look at the second and third historical lions above, it looks like they have three or maybe four very close shades of threads in the manes.  My threads were more dramatically different shades. . .so gave a different effect.
What I decided to go with was a mane that was almost entirely silk covered perle purl.  My guy's mane is mostly light brown silk perle purl interspersed with the medium brown, PLUS just a few blond highlights.  I also had a limited amount of the fabulous silk perle purls (they're real expensive), so instead of using them as they come (like the Maidstone lion), I expanded them slightly to create the open coil look.
Finally, I gave little Leo wispy hairs around the face using the light tan silk in a drizzle/moss stitch (I think this is the technique used in historical lion 3).  I think I'll probably go back and add some more wispy bits. . .but very carefully. . . since I've found that they can easily just start to look messy.
So...probably the biggest hurdle of the piece is DONE!  Still left are the end of the tail. . . and the surrounding medallion. . . and. . .. just to make sure I never really finish, I'm beginning to wonder whether maybe he needs the company of a little butterfly. . . or maybe a flower. . .  But those are issues for another day.
Posted by Stitching With Kittens at 1:05 AM