The Mysterious Case of the Striped Leaf

It was a dark and stormy night. . . . when what should appear on my computer screen. . . but a query from a Facebook friend about The Mystery of the Striped Needlelace Leaf . . . stitched yea these many years ago. 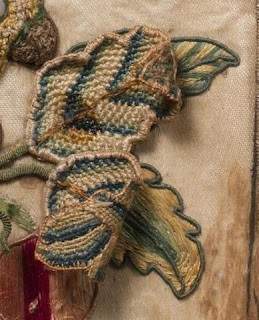 The leaf itself has survived for centuries. . . but how exactly did it come to be stitched?  Stitch detectives pulled out magnifying glasses, enlarged photos, and proposed multiple theories.

My theory was that the chevron striped pattern was created in a single piece by following the angle of the outer couched outline.  I based my theory on (1) it seemed like the easiest and quickest way to work and (2) in this photo at least, it looks to me like the stripes on either side of the center line line up exactly, which bolsters the theory that they were worked as a single line.  If the leaves were worked this way, the center line seen here is simply a vein applied as surface stitching, possibly to help hide a slightly messy area in the center where the direction changes.

But mine was not the only theory.  Kim of Baroque Embellishments -- who is a truly expert stitcher and designer -- thinks the two halves of the leaf were worked separately and then stitched together.  And she pointed out a photo (from the same historic mirror surround) where the color changes from one side of the center line to the other. . . indicating that this leaf, at least, must have been stitched in two parts. 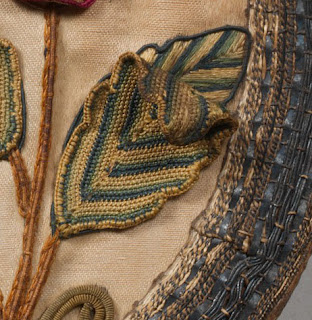 The plot thickens!  So it was time for some hands on detective work.  Could a similar leaf be stitched as a single piece. . . and would it look sort of like the original?

Step 1.  I made a quick tracing of a leaf and applied it to a ground fabric.  There is a special blue plastic-like film for this (used for needlelace), but I usually use an easier-to-find modern substitute -- clear self-adhesive shelf liner.  However yesterday, I couldn't find the shelf liner, so I used plain old clear packing tape.  (The plastic layer helps keep your needle from catching the ground fabric. . . and also means you can use a printed or traced outline without drawing on the fabric.)  Then I couched fine wire to the outline using a yellow thread as shown in this photo. 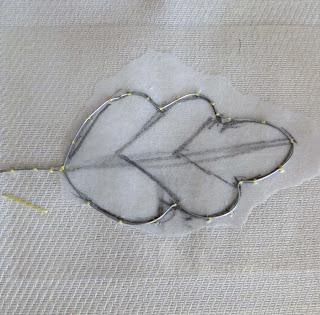 Step 2.  I began the needlelace with dark green thread (in this case 3 strands of DMC).  At the top you can see how I temporarily secured the starting thread in the ground fabric and secured it to the desired place on the wire outline by running it through the couching stitch.  Another important thing you can see is the red couching thread that I will use to stabilize the stitching thread as I work.  Most importantly, the return (what will become the cord of the corded buttonhole) is couched in the center to create the angle I want to create in the stitched pattern.  As I worked, I also sometimes couched the thread at the outer edges to help keep the thread in place as I followed the curved outline. 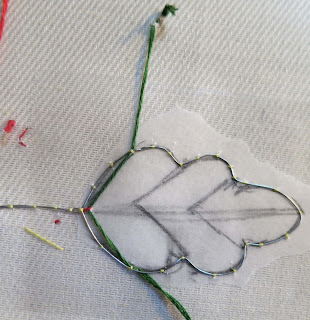 Step 3.  In the first photo below, you can see one row of completed detached buttonhole and the return for the second row.  Although it's not super clear in the photo, this return is also tacked down at the center with the red couching thread.  In order to keep the thread where I wanted it at the outer edge, in this case, I also tacked down the thread before I began the buttonhole stitching.  (You can see this near the bottom of the photo.)  You can also see how I modified the height of the stitches  in the first row just a little to make the rows of stitching more straight  (while the wire outline is more curved).

A quick aside - I initially thought I might have to couch the thread at the center line as I was working the buttonhole stitches as well.  But in this case that was not necessary to keep the angle sharp. . . but it might be if you used a different needlelace stitch. 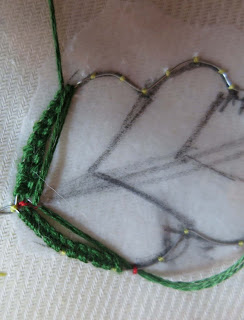 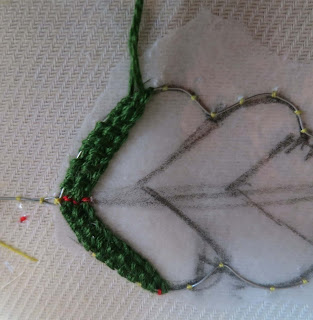 Step 4.  To continue, I just repeated the same technique with my other colors.  Here you can see the first rows of light green and bright yellow.  As I worked, I kept 5 needles active -- one tapestry needle with each of the 4 leaf colors plus a sharp needle with the red couching thread.  When first starting a new color, I secured it to the ground fabric with an away knot.  When I was ready to move to a new color, I parked the old color off to the side...and either wove it through the stitches round the outer edge or whipped it along the wire until it reached the right spot when I needed that color again.  Those parked threads will eventually get secured and covered by the final buttonhole outlining of the finished shape. 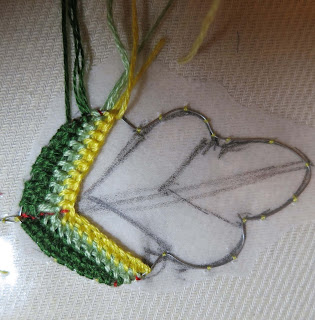 Step 5.  I simply repeated the color pattern until the leaf was complete.  Here you can see the leaf as I've finished the buttonhole filling and have just started cleaning up the outer edge by doing a buttonhole outline of the entire leaf.  As I go around, I'm catching the thread ends under the outside row of buttonhole stitches.  Looking at the finished leaf below, you can see how effective this technique is in getting rid of LOTS of threads.  This would be even more critical if you used a needlelace stitch that is only stitched in one direction and so would have starting / stopping threads with EVERY row.  Starting and ending a new thread for each row doesn't present a big problem because it's just buttonholed over at the end.  (In the original photo, look how "fat" that outside row of stitches is. . .   There are multiple possible reasons, but as my experiment shows, you can catch a lot of loose threads under that buttonhole edging.) 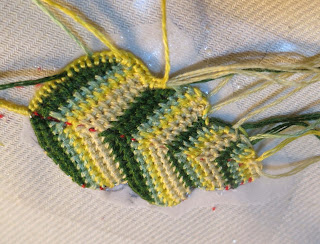 Finally, here is the finished leaf.  To my mind it is close enough in spirit to indicate that at least some of the historic leaves could have been made this way.  The angle in my leaf is not as acute as the historical example, but that's basically because I didn't have the photo in front of me and was aiming at about a 90 degree angle. I don't see any reason the angle could be made larger or smaller. . . depending on what you want. 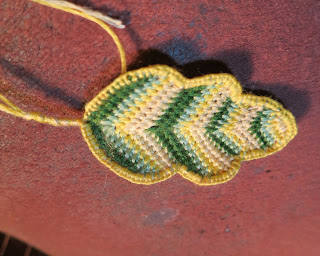 What my leaf does NOT account for is what you can see in the second photo at the beginning of this post pointed out by Kim.  So certainly some of the leaves had to be made differently.  Maybe they all were.  But I was quite satisfied by my experiment, and when I do similar leaves I this is probably how I'll stitch them.

Mystery solved?  The case remains open.
Posted by Stitching With Kittens at 1:22 PM