Progress continues on my Mermaid's Grotto piece.  The grotto itself is complete as seen in the photo below!  The result is very colorful indeed, but looking at photos of some of the original pieces (several similar designs can be found in the Twixt Art and Nature

Catalogue) and allowing for fading over the years, the historical pieces were probably once very simlarly bright and multicolored. 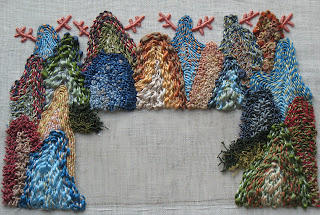 The bright mixture of colors has been my major challenge in the piece so far, as I am not terribly confident in my color skills.  I also wanted to shift the colors a bit from Tricia's model. . . so I couldn't fall back on just trying to match the picture as much as possible.  I'll have some close ups of some of the unusual fibers and techniques in a later post.

I also find myself increasingly intrigued by the this 17th century grotto fascination.  I know the mermaid personifies vanity. . . certainly not a positive allegoric characteristic.  But clearly the mermaid and her grotto were wildly popular -- at least for a while.  I wonder if the secret of the appeal might be the very fact that these grottos provide such an opportunity for almost over-the-top playing with color and texture . . . a bit like Halloween pieces today allow us to really have FUN with stitches and fabulous fibers today.  And from today's perspective (think Hans Christian Anderson fairy tales and Disney mega-films) the mermaid herself seems a pretty fun and positive creature too.  I wonder if the young stitchers of the 17th century thought so too.

Interestingly, the grotto appeal continued in a different form into the 18th century, where the well appointed grand garden always included a grotto.  Here's a picture of the grotto at Stourhead. . .but the mermaid here has been supplanted by a very classical and manly Neptune, and the grotto remains craggy but has lost its gem-like mix of fablous colors.  Have the "boys" appropriated our very feminine little mermaid and her colorful home?  Hmmmm..... 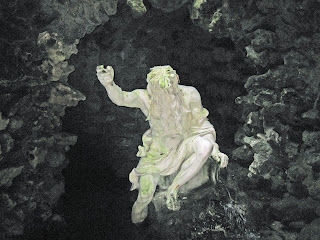 Posted by Stitching With Kittens at 12:31 PM