It's August. . . and hot. . . and the brain isn't quite at its sharpest.  So, some stitching on a nice straightforward band sampler should be just the trick, right?

Well. . . yes and no.  With the above logic, I jumped into the next band of the Jane Turner sampler.  It turned out to be quite a chunk to bite off, but once I got going, it got addictive.  Step one was the double-running outline. . .a bit tricky to count because the pattern is more pictorial and less a repeating design.  It turned out the easiest thing was to work counter clockwise. 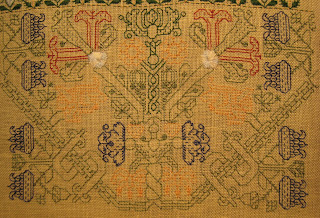 In many cases, at this point the band would be done.  Not so here.  Jane added a great deal of embellishment to her band including satin stitch and lots of trellis and spiral trellis sections.  Here's the finished band with all the bells and whistles. 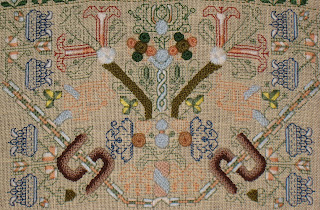 I got a lot of much needed practice on trellis stitch with this band. . . including what seemed to me like rather odd uses of trellis. . . in the angled olive green stems, the 3-colored brown "snakes," and little fiddly acorns, v-shaped stem, and the barber-pole stem. 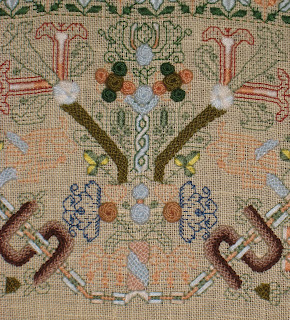 Add the spiral trellis shapes (that seem to be almost magic in how they create their puffy swirls) and the resulting band is very textural indeed. 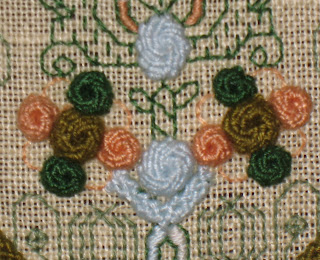 As I was working, I was thinking how different this band is from most samplers.  But browsing through photos online and in reference books, I think perhaps it's more that most of us pleasure stitchers today concentrate on samplers that aren't quite so complex.  If Jane were going to eventually do a complex casket or mirror surround with needlelace clothing and other effects, doing a band like this would make perfect sense.  And eureka!! the next large band of Jane's sampler is exactly that. . . a lady with needlelace dress.  I feel like I've caught onto some of the logic that may have underlain the original stitching!
Posted by Stitching With Kittens at 11:03 AM