I haven't been stitching much for a couple of weeks. . . at least in part because we've spent a relaxing week scuba diving and just kicking back in Key Largo.  Heavy use of sun screen and steamy hot temperatures are definitely NOT conducive to stitching!

But even in the quiet keys, my stitching projects kept popping up in unusual ways.  Several times at sunset we glimpsed a pair of manatees -- mom and baby -- in the canal right outside the apartment we had rented for the week.  It was fun to see them (well....sort of see them, since 99% of the time they were under water).  But it also brought to mind my little mermaid. . . . since one theory of the origin of mermaid sightings is that mariners caught sight of manatees and THOUGHT they had seem mermaids.  Is that really possible? 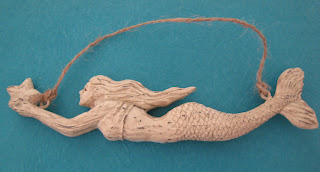 Mermaid as interpreted in my souvenir
ornament from Key Largo 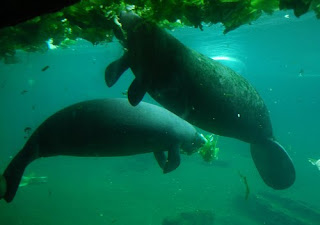 Manatees
. . . . well.....I guess maybe it could be possible, but if so, BOY those sailors had been away from home WAY too long, or had been enjoying their rum ration WAY too much.  Needless to say, my intent is that my 17th century style stumpwork mermaid more resembles the ornament than the manatees!
Posted by Stitching With Kittens at 3:51 PM