A lot of the travelers on the Jacket Tour were either professional and highly accomplished amateur costumers, including many SCA (Society for Creative Anachronism) members.
I find the accomplishments of these folks absolutely stunning.  I truly love embroidery, but I'm not sure if I could commit myself to stitch an entire coif. . . let alone a jacket. . . let alone create multiple complete historically accurate outfits.  While I often looked at the embroidery and asked myself "how did they do that," the costume experts were also asking the same thing about the garment construction. . . including all sorts of detailed and arcane issues that I barely followed.

But one issue that I think was common to both groups was the asking whether any of these beautiful garments were -- or could have been -- created by the wearer herself.

Tricia and the museum curators consistently chose jaw-droppingly splendid pieces for us to see, and many of them, like the Layton Jacket and other similar pieces (see November 2 posting) were certainly the work of professionals.  But there was also a range to the pieces that gave glimpses into lives of the less than SUPER SUPER SUPER wealthy.

Consider the Maidstone jacket, which we able to examine closely at the small but lovely Maidstone Museum.  Here's a photo: 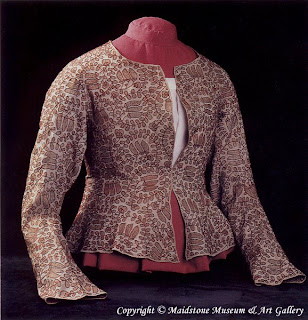 The construction of the jacket is fairly simple. . .unlined. . . and the embroidery is not complicated -- stem stitched outlines filled with running stitches.  It's beautifully done and the overall effect is fabulous, but was it possibly made by the woman who wore it?  We know it COULD have been because Lauren the Extreme Costumer (who was along on the tour) has indeed stitched her own jacket based on this very historical piece.  Check out pictures of her work here.

But wait. . . there were other pieces that might tempt an amateur stitcher. . . but those must wait. . .for another post.
Posted by Stitching With Kittens at 8:33 PM