A Bit of the Unexpected

No doubt about it.  By a couple of days into the tour, I had seen lots of EXACTLY what I had expected. . . item after item with beautiful needlelace motifs and stunning goldwork.

But we also saw some more unexpected items, including some jackets that are very different from the Layton and Plimoth jackets.  One was the Maidstone jacket (see picture in previous post).  But there were others.  Below are my sketches of the patterns on two others.  (Photography permissions prohibit posting photos.) 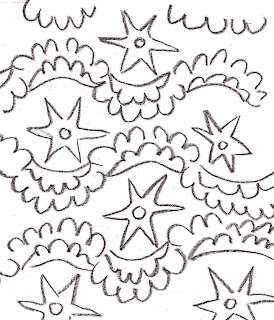 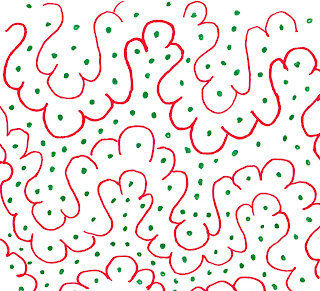 I thought that both of these patterns looked quite contemporary. . . and not at all what I usually think of as 17th century garb.  But both were striking. . . and would look good if worn today.  I'm especially interested in trying to glimpse what life may have been like for those other than the fashion elite, and these jackets seemed to do just that.
And both jackets also looked like they might well have been stitched by amateurs.  Why?  A couple of reasons. . . .the stitching is very nicely executed, but not terribly complicated.  The star and cloud (black and white) jacket was entirely done in backstitch. . . while the red and green stitched squiggle and dot pattern combined backstitch (red) and what I think are just several small overlapping stitches for the green dots.
It also looks like the patterns might have been laid out by novice designers.  As an example, the space between the "rows" of the squiggle and dot pattern is not totally even.  (In fact, one sleeve has more repeats of the pattern than the other.)
And what a relief it was to realize that even without the technical competence of the "masterpiece" jackets it was possible to create beautiful pieces of stitching.  In the words of one fellow traveler:  "My incompetence is historically accurate!"
That's my very favorite comment of the entire tour.
Posted by Stitching With Kittens at 12:08 AM