It's getting to be a bit like an historic needlework version of Where's Waldo!  As Sampler Stitcher has been reporting, she has located what looks like a partial sampler featuring the lady and trees band from Jane Turner's sampler.  This pretty piece was auctioned in 2010, and the owner has given permission to post the picture (Thank you!).  Here it is: 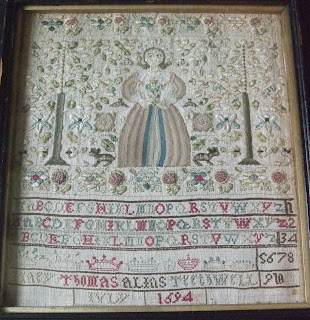 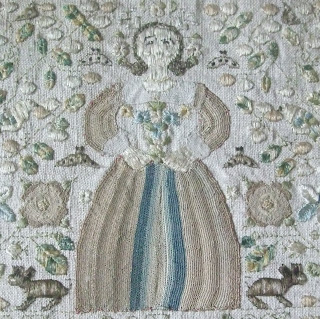 Lots of things to think about here.  This piece was auctioned as a partial sampler, and I'd bet that is indeed the case. Note and correction - my mistake.  The piece was auctioned as Mary's SAMPLER. . . not a partial sampler. My guess would be that at one time the sampler was larger, since generally early samplers from this period are long and thin, but the piece certainly more than stands on its own as a lovely piece of work.  Looking at the other Jane Turner samplers, this pictorial band has come towards the bottom.  It's after this band and the pretty little flowered band below it that the three full samplers take off in their own directions.  Given that this band seems to occur well into the sampler, it seems logical that this version was cut down for whatever reason -- damage to the higher bands or just a preference for this really pretty pictorial part (easier and perhaps more attractive framed and on the wall).
The bottom part of this piece strikes me as odd, however.  There are three different stitched alphabets, a panel of crowns and coronets, and the wording "Mary Thomas Alias Teethwell" and "1694."  Hmmmm.  Jane Turner and Mary Lawrey (no photo found yet) are dated 1668. . . while this is dated 1694,  26 years later.  That seems a pretty big gap to me.
And the wording is strange.  What does "alias" mean?  In those days, spelling was very fluid. . . so is this a misspelling or alternate spelling of a name. . . Alice?, Alyse?. . . or a different family name?  Or if it does mean "otherwise named," could it be the stitcher's maiden name was Thomas and her married name was Theethwell?  If so, it seems like an odd way to express this.  Does anyone know if "alias" was ever used to mean "married name."
I am definitely NOT an expert in samplers in general, or dating them in particular.  But to me the stitching below the lady seems later than mid-17th century.  I associate multiple alphabets and the crowns and coronets with later samplers. . . even later than the 1694 date on the sampler.  (I'd LOVE to hear from anyone reading this who DOES have the expertise to comment on this!)
This leads me to wonder whether the stitching below the lady band was added later. . . possibly in 1694. . . or maybe later yet by someone who mistakenly assigned the 1694 date to the piece.  Possibly the original stitcher added these sections later in life (I know there are documented instances of a stitcher completing a partial sampler later in life). . . or an even later stitcher added them to the piece.  In either of these scenarios, it would make sense that the girl's maiden and married names would both be available.  Or maybe there are two names for two stitchers:  Mary Thomas and Alias (Alice?, Alyse?, ??) Teethwell?
On a slightly different subject, since in my own stitching I'm "stuck" while trying to figure out how exactly to stitch my lady in this band, I'm especially interested in the variations of the treatment of the lady in these different sister samplers.  There seem to be two overall approaches.  In Jane Turner and the Richmond Sampler, the lady is angled slightly towards the right, and the center skirt, collar, and fringe of the shawl use a couching technique (a bit odd IMHO. . .but distinctive).  However, in the outline and partial samplers, the lady is depicted full on, and in the partial sampler, the collar, cuffs, and center skirt all appear to be in detached buttonhole (like the main skirt).
Here's Jane's lady: 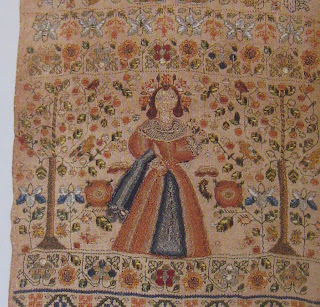 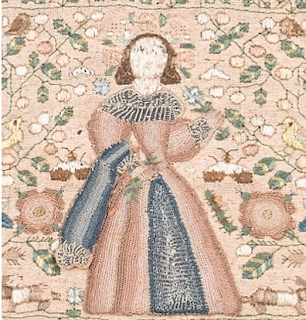 And here's the outline lady.  It really looks like the partial sampler lady is worked on this outline. . . right down to the flowery bodice of her dress: 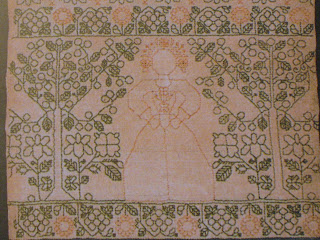 It's enough to make a brain tired. . . and mine is. . . so I will wait till next time for looking at YET ANOTHER example of this lady band.
Posted by Stitching With Kittens at 11:29 AM