1694 Sampler -- Correction and Some Interesting Details

Sorry no pictures to share here.  But I do have several pieces of info. . . embarrassing and interesting.

First the embarrassing part.  I'm afraid staring at similar samplers is beginning to befuddle my brain.  I mistakenly said that the 1694 Mary Thomas Alias Teethwell sampler was auctioned as a partial sampler. . .which this is not the case.  It was auctioned as Mary's silkwork sampler!

I want to stress that it was not my intent to denigrate this sampler in any way.  I have been staring at multiple samplers (including hours and hours looking at the reproduction I'm stitching) where the lady and trees band is one part of a much larger work. . . so in my mind, this is a 'part.'  I also personally think (no expertise. . .just MHO) that the 1694 sampler is certainly 17th century. . . at which time samplers were almost always long and thin. . . not more or less square.  So I'm afraid my brain made a couple of unfounded logical leaps.  I hope my lack of accuracy has not unduly upset anyone or sent them off on the wrong track on their own research.  I repeat -- I am NOT an expert.

Now on to more interesting info.  The owner of Mary's 1694 sampler has shared her up close observations in response to some of my "I wonder if" questions.  In reference to the alphabets and crowns sections, she reports that "the fine red silk stitching matches exactly with the above red silk there is no difference whatsoever" and that if anything the color of the date is a bit more faded than than higher up on the alphabet.  Thank you so much for sending this information along!

I feel like a real detective here assembling clues.  But I'll be darned if I know what they mean.  But I am enjoying spinning scenarios in my mind. . . and although NOT a researcher, I'm enjoying just a little thrill of learning a little new fact about this historical puzzle.  In my mind, the owner's observations would tend to argue in favor of a unified sampler by a single hand stitched in 1694. . . which would mean the pattern from Jane's sampler is being used virtually unchanged for over 20 years.  How exactly did that happen?  (Yes, I have some wild ideas. . .but no, it's probably better I just keep them to myself.)

But wait!  There's more.  As Sampler Stitcher has reported, Jacqueline of Needleprint, wrote her about yet ANOTHER lady and trees band, which is part of a VERY DIFFERENT 17th century sampler.  You can see a picture in the Goodhart Sampler book, pages 104-105.

Although I own this book and have spent a lot of time paging through it, I never noticed this band.  And I think I know why.  What really strikes me about the lady and trees band in the three "completed" band versions (Jane Turner, Richmond sampler, and Mary Thomas) is the splendidly vivid colors.  Only after drinking in the riot of colors did I carefully examine the pattern.  And the band in the Goodhart sampler is much more faded. . . so I clearly just paged right by it.  But it is clearly the SAME band. . . with the lady presented full face.

I am pretty sure I also can identify another band from Jane Turner in this Goodhart sampler.  I think the third band from the top is an upside down slight variation (elongated center stem allowing the diagonal bands on either side to extend much farther towards the corner) of this band from Jane's sampler (photo below is my stitched version). 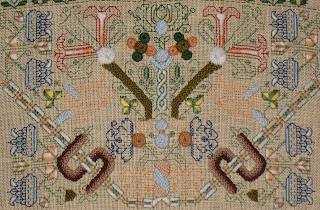 However, the rest of the p. 104 Goodhart sampler is very different than Jane Turner and sister samplers. . . or at least so it seems, since this sampler is only part of the original (cut off just above the lady and trees band).  So for sure that lady and trees band had a life of its own and was popular enough to be stitched in almost identical form into this very different sampler.

Interesting, huh?
Posted by Stitching With Kittens at 2:43 PM