We had beautiful spring weather. . .with all sorts of flowers out that we won't see for weeks yet here at home. . . and DH and I had a great time taking walking tours, browsing through museums, and generally soaking up the atmosphere.

Amid all this, I did manage to squeeze in some needlework-related sightseeing. . . most specifically, a visit to Fenton House in the Hampstead section of London.  We paired this with a walking tour of this charming part of London -- which we had never visited before!  Fenton House is a 17th century house -- which when built must have been WAY out in the country.  And what a pretty, pretty house it is!  I would move in tomorrow. 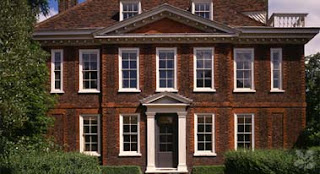 The house is known for two collections:  a collection of period harpsichords (all beautiful!) and a collection of several dozen 17th century needlework pieces.   So DH was again on his own as I stuck my nose as close as I could get to to the needlework. . .for what must have seemed like hours to him.

The collection consists of both stumpwork and canvas work pieces.  I was most interested in the stumpwork -- not because I don't like the canvas work, but I am pretty clear on how those pieces were executed, while the exact "how to's" of the stumpwork remains rather mysterious.  Happily, I was allowed to take photos. . .but not with flash. . .and apparently when I turn the flash off, my auto focus goes off too. . . so my photos are really a mixed bag.

Here are some of the highlights.  First, a lovely panel that looks like it was originally meant to be sections for casket. 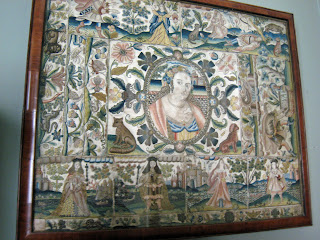 There were lots of really neat animals in this piece -- including unicorn, snail, rabbit, fox, dolphin (or maybe whale), birds, butterflies, and several dogs. . .and yes, a lion too.  Getting good photos of many of these was difficult.  Below is my best shot of the lion (he's towards the upper left hand corner in the piece). 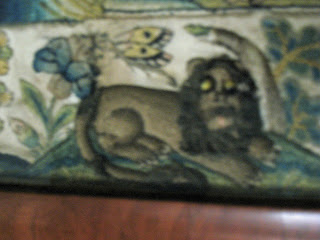 I was much more successful with the fox and the dog, located at either side of the main medallion and much easier to shoot.  I also don't remember seeing closely similar animals in other pieces, and I think they're both really beautifully stitched.  I especially like the textured effect on the chest of the dog. 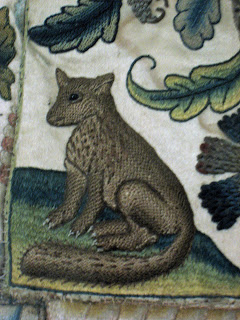 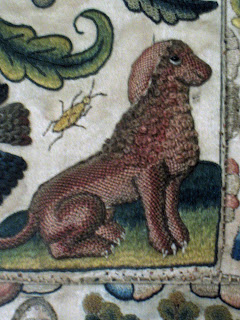 I also spent a lot of time examining a splendid casket. . . gorgeous, but difficult to photograph without major reflection off the glass cabinet. 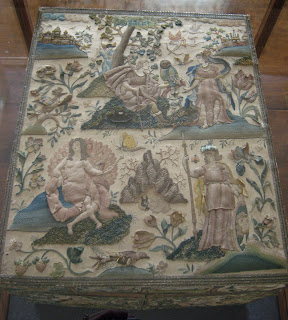 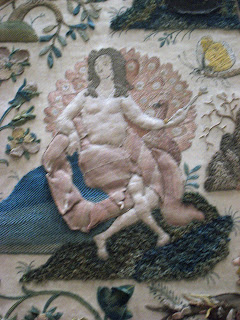 I really was taken by some unusual birds on this piece.  Don't you love the shading on the owl? 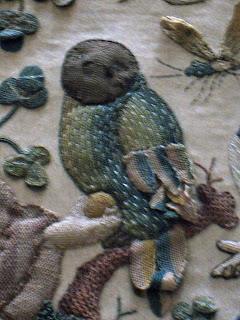 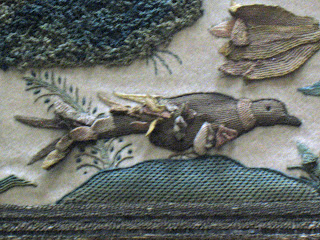 Some of the most intriguing looking panels were hung above one of the harpsichords. . . where they were close to impossible to examine -- unless I stood on the harpsichord, of course.   I was especially intrigued by the second panel, which appears to be worked on a darker ground of some sort.  Even with opera glasses and my camera's best telephoto setting, I wasn't able to see exactly what the ground fabric was. . . or whether the darker color is really stitching or needlelace over a more traditional light ground. 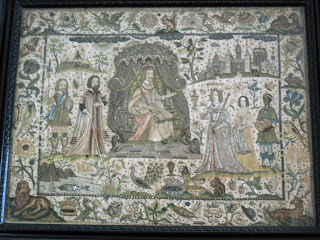 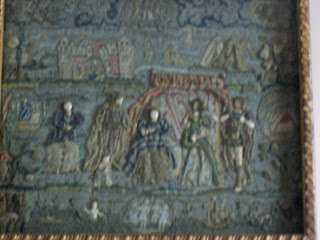 So....I would have liked to look much closer and see more.  But it was a wonderful afternoon!﻿
Posted by Stitching With Kittens at 11:22 AM