How were things done and amazing coincidences

Another study board in the V&A study rooms that I found especially interesting was one containing two pieces -- first a piece of printed fabric AND the same patterned fabric in the shape of a coif, which is embroidered with couched silver thread and very fine black stitching (which in photos is virtually indistinguishable from the black pattern beneath).  Accession numbers for the 2 items are T.174B-1931 and T.21-1946.

Here's my photo of the unstitched panel of fabric: 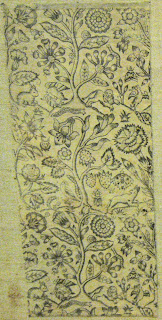 And here's the same fabric printed in the shape of a coif, and stitched with silver and black: 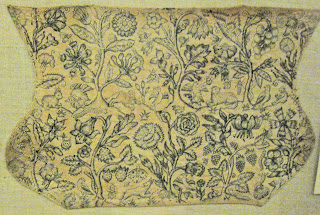 Here's the V&A's description of the piece:
Coif and panel of linen printed from engraved plates, English first half of the 17th century. The linen was evidently printed in the shape of articles of costume and was probably made for embroidery purposes. The coif is embroidered with couched silver thread (mostly recouched at a later date), black silk speckling, and trimmed with sequins.
Here is a close up of the unstitched fabric.  I was especially taken with the details, especially of the animals.  And, of course, it's got the charmingly out of scale elements common to all these pieces, like that giant-sized moth just to the right of the lion.
: 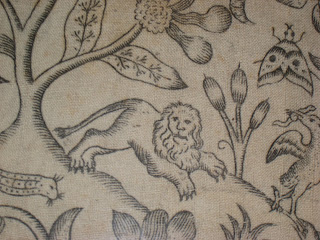 And several of the stitched piece: 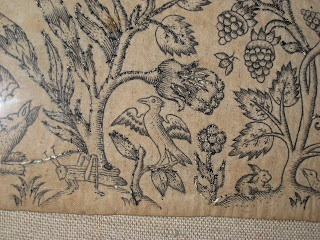 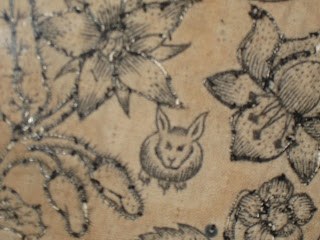 In the pictures you can see some of the couched silver thread.   But in person with the stitched and unstitched pieces side by side, it was evident the coif is quite heavily stitched -- but the black stitching is so fine that it appears almost "printed."   Ah. . . if only we could have seen the back to see how that stitching was accomplished.
For me, this provided another fascinating insight into the materials 17th century embroiderers had available to them.  (How similar is this to today's materials where certain designs -- Debbie Mumm's, for example.. . among many others -- are available in many different formats.)
Now for the amazing coincidence.  When I posted my first trip report, I heard from Rachel K. asking me if I'd seen the "inked coif."  And yes, it turned out that she had been researching this very piece, and had found some interesting additions. . . among which are a piece of the same patterned fabric in the form of the back of a jacket or shirt AND a modern reprint of the pattern. . . which has "censured" some of the slightly gruesome aspects of the original pattern, like the one bird killing a second one as seen on the right of the photo.  You can read further about Rachel's research on her blog here.
I'm not sure what all this tells us about the differences between 17th century and 21st century sensibilities, but it sure is interesting to ponder. 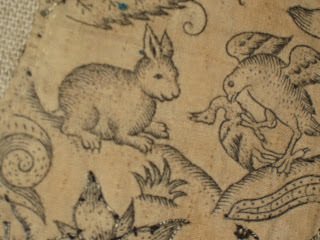 Posted by Stitching With Kittens at 12:22 PM