Starting Out on A Symphony of High Notes

No sooner had we touched down and staggered, bleary eyed, into the London Hotel than we were off and running and having close up experiences with beautiful historic embroidery!  Day 1 we went to the Museum of London where we saw jackets and gloves!  Day 2 saw us at the meandering through the vastness of Hampton Court, with a special visit to the Royal School of Needlework.  Alas, no photos were allowed in the RSN, and those at the museum of London cannot be posted.

But come Day 3, we spent the entire day at the Victoria and Albert Museum where we were able to go behind the scenes to see the Layton Jacket, the jacket that the Plymouth Jacket is based on, plus two more jackets.  I can't publish those photos (you can see the first 2 jackets at the V&A website), but we were also able to take photos of items on display and items in the textile study rooms. . . something that all V&A visitors are allowed to do.

Since I have a friend who is especially interested in medieval embroidery, I wanted to be sure to get some photos for her.  Some of the most spectacular pieces -- like the 14th century Syon cope -- are displayed in the recently opened Medieval and Renaissance galleries.  And other pieces of opus anglicanum were available in the study room.

Here's the spectacular 14th century Syon Cope and some close ups of some of the charming seraphs that are scattered across this fabulous piece.  I'm especially taken with the variety of wings on the seraphs -- they look almost architectural, don't they. . . and I think each was different: 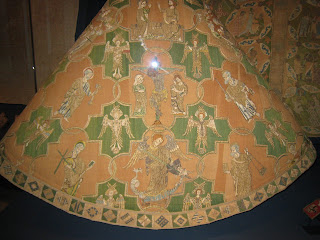 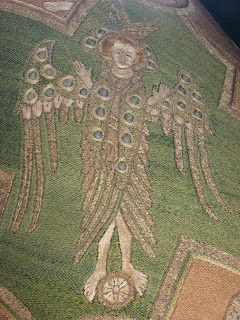 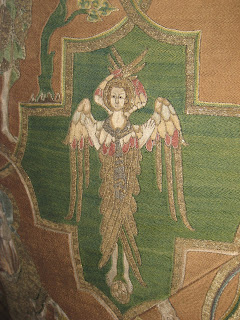 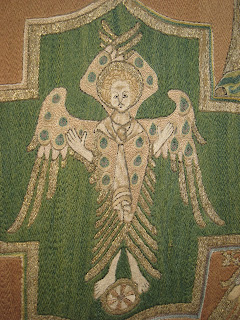 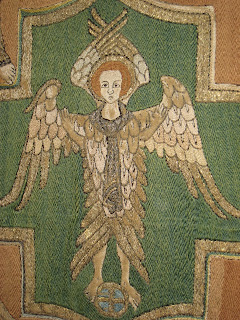 And here are some close ups of some 13th century fragments from the study rooms.  I'm just blown away with the freshness and vibrancy of the colors! 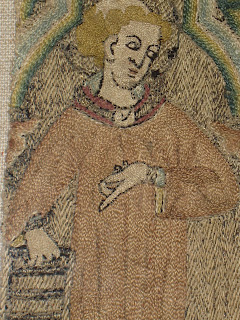 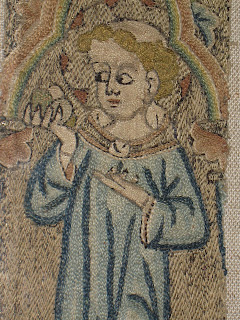 Posted by Stitching With Kittens at 10:00 AM